Lymphedema – living with a disease no one understands.

My legs were bandaged up to my knees in 7 layers of gauze:
What it’s like to have a disease no one understands

I was seven months pregnant when a woman in a children’s toy store stopped me while I was browsing a few books.

“I know what you have,” she said very loudly looking at my legs that were bandaged up to my knees in seven layers of gauze and blue medical boots on my feet. “You just had a bunionectomy.”

By this point, I was used to the gaping stares and people randomly telling me how sorry they were or asking what had happened. Even the few children who had inquired about my situation had been more polite than this.

My mind raged with the “I can’t imagine why you would think a pregnant woman would have elective surgery” retort.

Instead, I told her, “Actually, I have lymphedema.”

Confused, she quickly displayed what I like to call the “lympha-what” face.

So I tried to explain. I’ve found moments like this are best used for educational purposes.

Most people, unless they’ve had breast cancer, haven’t heard of lymphedema. I had no idea until I was diagnosed.

I was five months pregnant.

The lymphatic system is an important ghostlike network of protein-rich fluid that helps remove toxins in the body. It is essential to one’s immune system. It is the cleanup garbage crew of vessels and nodes, like toilet plumbing that helps you flush everything out of the body.

The disease won’t kill you; it is just extremely painful, and there isn’t a cure. It’s like having a throbbing migraine in your legs that gets progressively worse as the day continues while fluid drains into your limbs. People can get it anywhere in their body.

Our skin is our biggest organ. When things get messed up, it usually is the first to shows signs. My legs were filling up like water balloons full of toxic waste, and my body had no way to release it. 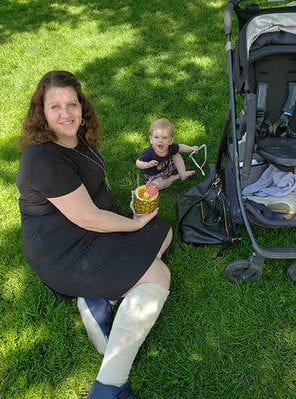 A lot of other people are suffering too. An estimated 10 million Americans have lymphedema, according to the Lymphatic Education & Research Network (LE&RN), and Stanford University Medical Center. That’s more than the combined number of people who have multiple sclerosis, muscular dystrophy, ALS, Parkinson’s disease and AIDS in the U.S.

Congress has a chance to do something about this right now. The Lymphedema Treatment Act, led by Democratic U.S. Rep. Jan Schakowsky of Evanston, would require insurance companies to pay for much-needed compression garments. This proposed legislation has been reintroduced in Congress more times than I care to count. It has bipartisan support, but it keeps languishing. I really hope this time will be different.

Lymphedema is a disease that is diagnosed through eliminating other potential causes, like a blood clot or heart problems.

The initial physician who saw me prescribed diuretics for the swelling in my legs. I later learned that is one of the worst things you can do because it doesn’t help with the inflammation and can exacerbate the problem.

Unfortunately, as NorthShore Medical Group’s Dr. Joseph Feldman told me, “the way we treat this disease hasn’t changed in 40 years.”

It’s wearing expensive compression socks that can cost $70-$250 a pair during the day. It’s sleeping in oven mitt-like puffy up-to-my-knees boots at night. It’s also using a lymphatic drainage pump that encases my foot, leg and stomach like a mummy covered in brown Velcro straps and pliable fabric. One treatment takes an hour, and I’m supposed to do it daily. I lie flat on the bed. I usually get cold and sleepy as the lymph fluid is pumped up through my heart and into working lymph nodes to flush out the toxins. Once finished, I immediately feel alert, refreshed.

For me, the pump and night garments make a huge difference, but each device costs $3,000-$5,000, depending on insurance. I’m one of the lucky ones. My insurance covered some of the cost, and I was quickly diagnosed in less than a year.

Those who are on Medicaid aren’t so lucky. Many treatments aren’t covered, which is why federal legislation is so important. Without these essential garments, the disease can progressively get worse and spread, compounding in stages if unmanaged.

Many people with lymphedema are breast cancer patients who get this disease after their lymph nodes are removed during a mastectomy. It happened to actress Kathy Bates, national spokesperson for LE&RN, who has said, “For me, living with lymphedema is almost worse than having cancer.”

About 10 percent of us who have lymphedema have primary lymphedema, which is hereditary and associated with more than 40 rare diseases.

When I was pregnant, I had to make a difficult decision: immediately enter intensive hospital treatment or wait until after the baby was born. Without any medical studies to guide me, I listened to my gut and decided to be proactive.

I was the first pregnant patient of Jennifer Kamieniak, a lymphedema specialist at Illinois Masonic Hospital in Chicago. Each session began with manual lymphatic drainage, a type of light touch massage. She was careful not to rub my belly, but every time she worked, the baby moved. He’s happy, I told her. He seemed calmer after every treatment. After moving the lymph fluid out of my body, she wrapped my legs and feet in layers of foam and gauze to contain the swelling. I always felt better.

Unfortunately patients with lymphedema are much more likely to get cellulitis, a skin infection that can kill you. After my son was born, I got cellulitis for the first time in my C-section incision. It spread like wildfire. In less than a day, I had a footlong burning rash in my incision.

Even a small shaving cut is now something I have to worry about because I’m more prone to infection. Within hours, a bug bite or bee sting can send me to the hospital with cellulitis. It’s not something an EpiPen or Benadryl can help.

Along with antibiotics, an emergency room doctor realized, Pepcid — because it’s a histamine H2-receptor blocker that decreases inflammation — makes a difference even though I don’t have acid reflux.

A series of severe reactions to bee stings prompted me to do genetic testing at Lutheran General Hospital in Park Ridge. They told me I was the first to get tested for lymphedema, which later revealed two genetic mutations of “uncertain significance.”

I now must wait until science catches up to technology.

What I have learned on this journey, I already knew as a journalist. I never stopped asking questions, and I switched doctors when I wasn’t getting the help I needed.